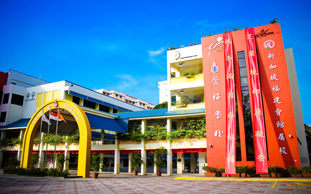 Chongfu School, formerly known as Chong Hock Girls’ School, was founded on 16 April 1915 by Mr Wang Huiyi, a Supervisor of Schools with the Singapore Hokkien Huay Kuan (SHHK). It was the only school for girls at that time and was situated at Chongwen Ge beside the Thian Hock Keng Temple at Telok Ayer Street. At that time, there was only an enrolment of about 30 female students and lessons were conducted by Madam Lin Suqin, the Principal herself, in Hokkien.In 1930, the school underwent a revamp. Its building was extended to Stanley Street and a new committee was voted in at the Hokkien Huay Kuan with Mr Tan Kah Kee as the President of the association. In the same year, Mandarin became the medium of instruction.Over the years, the school saw success in its increasing enrolment and good academic results till the Japanese Occupation in 1942. The school was then forced to close and it reopened in 1945, a month after the war ended. In 1949, it had the first intake of boys and became a fully government-aided school in 1957.The year 1985 marked a new chapter in the history of Chongfu Primary School when it was relocated to a more populated area. This was largely due to the decreasing enrolment as more and more city dwellers moved out of the city to settle in the new towns all over the island. On 23 December 1985, the Singapore Hokkien Huay Kuan accepted the new school premises at Yishun New Town under an agreement with the Ministry of Education. After the relocation, Chongfu School started taking in pupils of all races and offering all three Mother Tongue languages, namely, Chinese, Malay, Tamil. Another new chapter began with the school undergoing PRIME in 2000. New and special facilities were added to better equip the school in its delivery of a holistic education.

Chongfu School is well regarded as a high-performing school and much sought after by parents in Yishun, other parts of Singapore and overseas. To help our pupil learn holistically in a dynamic educational landscape, we have put in place well-structured programmes that integrate different disciplines and provide diverse learning pathways to develop and stretch our pupils. Our PSLE results have been consistently above national average and we have also achieved good results in quality passes. For the past 20 years in Yishun, 8 of our pupils were awarded the prestigious Prime Minister’s Book Prize for their outstanding performance in the PSLE and bilingualism.

Since January 1999, Chongfu School has been a member of the N2 Cluster of schools. Being a part of the N2 family has brought benefits to the school at all levels, from the key personnel to the teachers, EAS and pupils. We enjoy economies of scale in resource deployment, greater exposure and collective wisdom through professional sharing and training sessions.